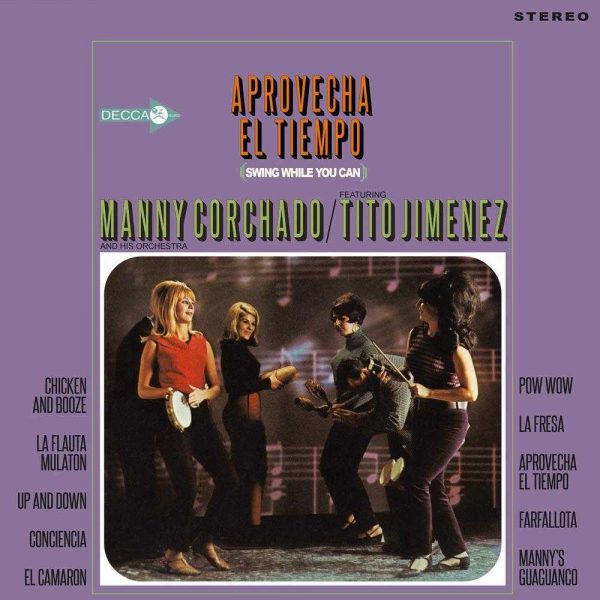 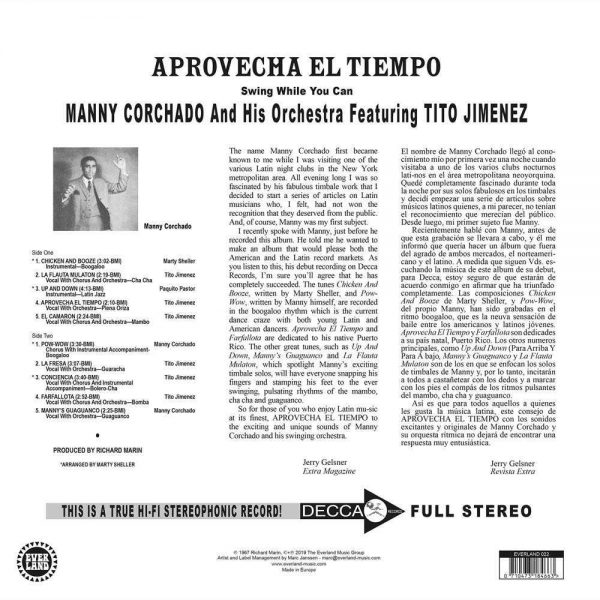 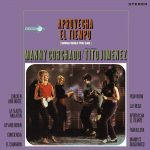 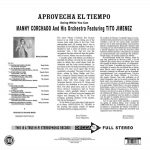 SHORT: An intense fusion of Son Cubano, Rhythm & Blues and Western Pop and Rock’n’Roll that recalls the greatest artists of the Afro Cuban dance music and Latin Rock respectively such as Santana, Tito Puente oder Compay Segundo. A collection of catchy songs that invite everybody to dance. A must have for each fan of Latin pop and Boogaloo music.ó

DETAILS: 1967 was a year where musical development went faster than lightspeed with so many new styles emerging from the basements of the musical hotspots in the USA and Europe such as London, San Francisco, Los Angeles, New York City and many more. A year where pop music was colorful and went without boundaries. And in between were Manny Corchado, his orchestra and a guy named Tito Jimenez, who might be a prominent figure in the later 60s “Boogaloo” movement but I am not certain for nothing could be found on the internet, neither about Manny nor about Tito. Mystical figures who released only one beautiful record and collectors item among fans of latin dance music of the 1960s which fetches prices over 200 USD for a copy in good shape. So why is this such a legendary piece of music’ If you ever experienced the Boogaloo sound of the days when San Francisco was the ultimate capital of popular music and the place where more hippies and kids gathered than anywhere else on this planet, you will certainly understand. Boogaloo came from the streets of Harlem where Afro American and Afro Cuban musicians lived and partied together and therefore Rhythm & Blues, Rock’n’Roll and Latin dance music like Son Cubano merged into another until a new exciting sound emerged from the backstreet halls to hit the clubs. Jazzy elements like saxophone solos in the Bebop style, shaking and whirling percussions that were taken straight from the Cuban music of the times when the Son Cubano orchestras were huge and the whole city of Havanna was a simmering dance floor, straight elements of current rock and pop music, everything that was cool from both worlds became one big sound for a moment. And Manny Corchado, his orchestra and the mysterious Ramon “Tito Jay” Jimenez were at the pulse oft he movement. One of the greatest pieces on this album is “Pow wow”, a hot blooded latin pop song with vocals singing one single but very memorable line in Spanish language with a few spoken words added in both, English and Spanish. The hypnotic and nearly manic drumbeat at the beginning, the howling of the “Indian” warriors, the words spoken by the chieftain before the straight pop rhythms set in, everything is just in the right place to create an atmosphere that will grab one’s mind and move him. The tune is powerful and energetic despite being more mid paced. The brass section gives a latin big band flair, the “Indian” sounds” add an exotic touch. Amazing song and as catchy as such a song has to be. While “Pow wow” made up the middle of this record we jump over to “Chicken and booze”, a three minute instrumental with a furious saxophone as howling lead instrument and the brass section laying down great melodies on the rhythmical substructure that obviously finds its roots in the Afro Cuban dance music, just in a more straightened up way. This is in fact a fusion sound that will leave nobody sitting on his chair but twirling around on the floor. Or let us check “Up and down”, third position on this album. The whole song is jumping and swinging, the brass melodies are catchy and soulful with a direct link to Latin American traditions, the middle section is made of percussions only which hypnotize the listener and there are saxophone and trumpets going into solo duels with each other. This is a frantic dancer, a hot groover, a steamy dancefloor sweeper. Whatever you call this piece of music, it haunts you, it comes as close to primal music in some parts as it can and goes back to the sweaty dance halls of the 1950s in Havanna or in US cities. All in all the band is a tight unit that knows to lay down a thrilling groove by ejecting a complex network of percussion and drum figures upon which the melodies grow straight into the listeners’ soul. The vivid production gives you the impression to be right in the middle of the dancing crowd while the band plays there live and in colour upon the stage. It still provides everything the listener needs. A crystal clear sound that shows every instrument, every single percussion beat and the power that makes this record so intense. Just in case you are a fan of Latin music such as Salsa or Son Cubano, grab a copy. Just in case you wonder what was going on in 1967 aside from the obvious psychedelic and heavy rock sounds, well, grab a copy. Or if you love what two years later Carlos Santana and his band have created by adding wild rock elements, then go for Manny Corchado, his orchestra and Tito Jimenez who might not have any of Carlos’ smoking lead guitars or Gregg Rollie’s infatuting organs but will enchant you with their spirit. This current reissue on Everland Records will hopefully activate a whole new generation of Boogaloo / 60s Latin Pop fans to discover an album that was made to become a classic.