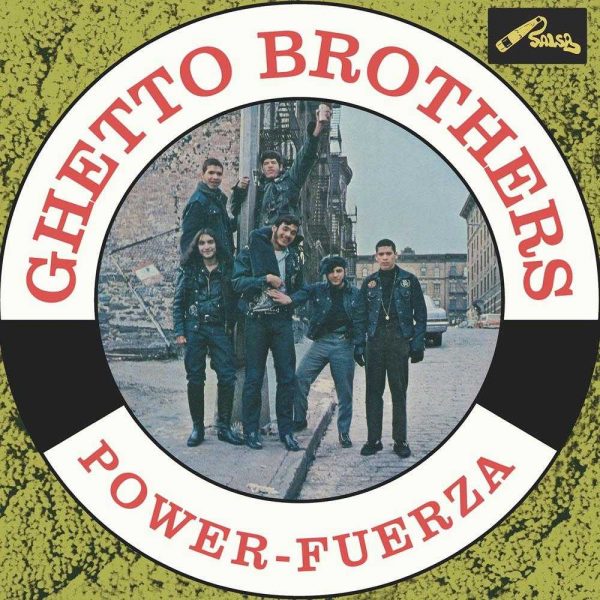 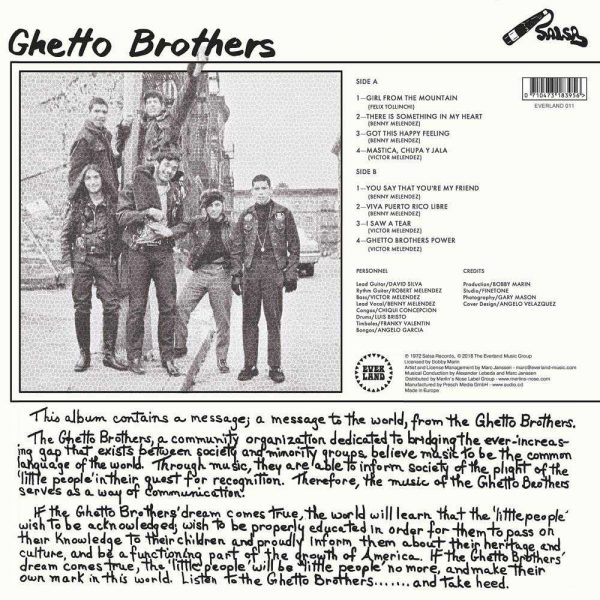 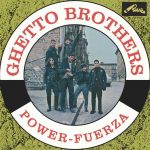 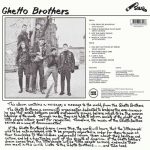 * Latin rock at it’s best and most intense from the streets of the South Bronx / NYC
* An album made for those freak out to Santana or Peruvians Laghonia
* A legendary yet long lost crown jewel from the early 70s latin rock underground
* Produced by Bobby Marin, the godfather of boogaloo
* Original copies from 1972 fetch utterly insane prices among collectors
* Excellent sound and performance by high class professional musicians
* Long awaited and overdue rerelease on vinyl and CD
* Fully licensed
* Remastered audio
* LP housed in a superheavy 430 g art carton cover
* CD housed in a beautiful digipak
* Ultimate collectors item for fans of early 70s latin rock

SHORT: A brilliant mix of Latin rock and funky garage rock in the late 60s vein of SANTANA or Peruvians LAGHONIA with captivating songs and a high class musicianship presented by a bunch of young Puerto Ricans living on the steamy, loud and dirty streets of the SOUTH BRONX / NYC. A must have for all fans of the above mentioned acts with a sound as fresh and vivid as back in the day this gem was released. Produced by Bobby Marin.

DETAILS: When you see some dude having listed an album for sale somewhere for the utterly crazy price of 7500 US$ saying in the item description that he actually does not even want to sell it due to being his favorite piece of music ever, it really must be something special. When you check for other auctions and sales and find this goodie being sold regularily for 650 to 1200 US$, you get your first impression confirmed. This is indeed a really special album. THE GHETTO BROTHERS were not initially a rock band when they formed in the Bronx / NYC back in the late 60s. They were a street gang with mainly Puerto Rican members with a rather political attitude. For example they tried to uplift young black and hispanic people or even stood in between rival gangs to make a truce work. They were certainly not only good guys concerning their actions as they used to plunder a local music store, Mary Lou Records, from time to time where then young Bobby Marin, a leading figure in the field of 1960s Boogaloo music and later on famous record producer up to the present day, used to work in. As the store owner thought about using a shotgun to solve that problem, Bobby Marin convinced him not to do so to avoid that anybody gets hurt and took the chance to speak personally with the gang leader Benji Mendelez who turned out to be the lead singer of a band formed by members of the GHETTO BROTHERS. Meanwhile Benji Mendelez found out about Bobby’s engagement in the music industry and both made an agreement. Bobby would produce an album by THE GHETTO BROTHERS and this is what we now will talk about. In what way is this an outstanding gem of Latin American funky rock music from the steamy, loud and dirty streets of the South Bronx / NYC’ Well, it is of course rare as golddust in its original pressing. This is an aspect that makes it interesting for collectors of 70s Music and the seed from which the legendary reputation grows. But does the music really match with the status the album enjoys among music lovers’ It does. My first impression was that THE GHETTO BROTHERS were a very talented band mixing earthy garage rock with the one or another occasional fuzz guitar and Latin American sounds and atmospheres to create an exciting, simmering version of current rock music. The garage rock stamp still fits perfectly with this album as the sound is quite basic and vivid, just as if you were standing with the band in a dusty basement room where they either rehearse or play a show to a crowd of frantic youngsters. The music itself is quite relaxed in most parts, with the one or another exception. “Got this happy feeling” sticks out with flashing rhythms and a cheerful lead vocal line upon a bed of likewise flashing guitars with a funky touch. So these funky elements also make you realize that there is more behind than meets the ear. And when the band goes into sheer groove passages with the percussions and drums taking over the lead role, I am certain nobody will be left on his seat. This song reminds me of a more primitive version, if I can say this, of what SANTANA did a couple of years prior during the time they released their debut album and played Woodstock. And indeed these Puerto Ricans have the talent even to be on par with good old Carlos and his mates, who already were super heroes by the time THE GHETTO BROTHERS released their sole album. No idea who even might be the greater in terms of musicianship and composition values but with a major production this album would probably have given SANTANA a run for their money. But gang life is tough and casualties appeared leading the band to the land of myths and fables. But with many folks who love this music the band stayed for nearly 50 years and this reissue on EVERLAND RECORDS happens as always at the right time to keep the flame burning brightly and maybe even brighter than ever. A few old members, including leader Benji Mendelez, are no longer with us to enjoy the late success of this masterpiece but those who remain will. If you like Latin garage rock such as LAGHONIA from Peru, this is the real deal for you. Grab your copy and celebrate life as this is what THE GHETTO BROTHERS always had in mind.