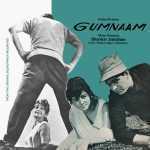 This is the soundtrack to classic 1965 Bollywood movie based on the book “And Then There Were None” by Agatha Christie. Originals in fine condition of the rare first Indian pressing score amazing prices among collectors of 1960s stage and screen music vinyls. And it is exactly what you might expect from such a record. The musical elements span from classical Hindustani music, popular folk dances from India, lushly orchestrated screen music, exotica sounds and the pop music of its era with hints of country, latin, surf and swing. A colorful and all over the place joyful musical effort featuring well known vocalists such as ASHA BHOSLE, LATA MANGESHKAR or MOHAMMED RAFI. Despite the delicately entangled arrangements of the songs, there is always a cool vocal line and harmony to attach the corresponding tune to the listener. A very entertaining record if you have an ear for exotic pop and screen music!