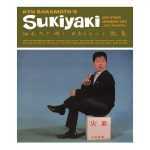 If you are curious how Japanese pop music sounded in the early 60s, here is one of the most popular examples. So this reissue will hopefully open new channels for fans of abundantly orchestrated 60s pop to listen to Kyu Sakamoto, who sadly perished in an aircraft accident in 1985, which is up to now the biggest event of its kind in flight history. Anyway, what do we get to hear from this man, very young but already experienced at the time? Mysterious, soulful songs with big orchestral arrangements, tunes that show elements of latin music such as bossa nova, typical elegant Doo Wop and pop ballads of the day with a heartwarming melodies, some exotic tunes that draw influence from what western people might consider Japanese music, real or fictional. The most popular tune that became a hit all over the world is certainly „Sukiyaki“, which was a big success in a German language version by THE BLUE DIAMONDS, a Dutch band of Indonesian origin. He did not spare any style popular in the 50s up to the early 60s. You’ll hear elements of chanson among many others. The whole album is relaxed and beautiful with a friendly expression. The orchestra, the big band, whoever accompanies Kyu Sakamoto dresses all the compositions sung with passion and a pliable voice into a garment of absolute elegance. This album definitely gets you to feel great and joyful and fluffy. The use of Japanese language for the lyrics might more appeal to native speakers and those with a fondness for exotic aspects coming with albums but it just makes this record even more outstanding. It’s a colorful and memorable effort.