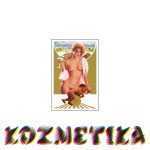 Yugoslavia had a rich and colorful scene for rock and pop music back from the 60s to the 80s. By 1983 at the peak of new wave music and electronic rock even the Eastern bloc countries were hit by this fresh and exciting style. Therefore there is no wonder that KOZMETIKA, one of the Yugoslavian forerunners of electronic rock, had several similarities to Western acts from Germany or England to offer despite singing in their native tongue and going for it with a quite original approach. There are many elements of seventies space rock and epic electronic rock to be found within the straightened but quirky new wave song structures. Electronic and acoustic drums interact perfectly and create a smooth rhythm flow for all the tunes. You can hear flutes in the long progressive piece “Gaja” which is nothing less than an anthem to honor mother earth and gets close to such 70s greats as NEU, CLUSTER, TANGERINE DREAM and HAWKWIND with its repetitive beat and some wicked guitar jams. There are even some more contemporary aspects to melt into a beautiful hybrid of both worlds with all the 70s space and cosmic rock. You can hear where KOZMETIKA are rooted and where they want to go. Hard driving tunes show a relation to the punk and post punk sounds that were hot back then and still drag you away deep into outer space. Where most of the German NDW bands went pop KOZMETIKA took a step over the barriers of radio friendly music and get closer to a modernized version of NEU, AMON DÜÜL II, LA DÜSSELDORF mixed with a dark and gloomy element that adds a radical mood to the compositions than aiming for making the housewives’ hearts melt with sweet and soft harmonies. Even the more relaxed passages present an atmosphere of departure. All fans of classic early 80s Eastern Bloc bands like OLYMPIC from Czechoslovakia or later day OMEGA and new wave / post punk heroes like BAUHAUS, JOY DIVISION, GRAUZONE and Joachim Witt will certainly love to take a listen to this. Take a listen and get enchanted.