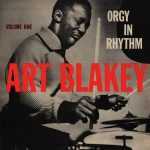 It is interesting how the Jazz sounds of the 1950s and early 1960s influenced later psychedelic bands and if you dig yourself through to the most influentual records of that mind expanding extraordinary wing of jazz music you will hit Art Blakey and this album directly with your nose. The title says it all and what you get to listen to here will surely take you away from the cold and grey reality and drag you onto a trip to the center of your galaxy. It starts with a haunting passage that shows roots in African and latin folk music, then explodes into a cacophony of poly rhythmical patterns. There are voices allover the place but it is not singing in the actual way. This voice howls in the more gentle parts and spits commands over the wild rhythm burst outs. Art Blakey smokes and despite his completely unleashed playing he makes his drums sound melodic if that makes sense to you. Sometimes he gets accompanied by a piano or flute but their lines will hardly show up and seem like doomed greetings from forlorn dimensions while the sheer power of the drumming becomes the true reality and tears up your mind to let it float out. And this is only the first piece called „Buhaina chant“. „Ya ya“ as second piece is a bit more melodic and has an irresistible groovy flow, still with this melodic drumming that builds the spine of this outstanding record. German 70s project NIAGARA has recorded similar drum based music 15 years ahead of this 1957 release. The few bass lines and piano sounds and the occasional flute are nothing but tinges of colour to make this an even more exciting affair. And it really sounds like a ritual as the album title implies, a ritual as quite often indicated by H.P. Lovecraft in his haunting novels and short stories about unspeakable cults. The album gets more song oriented with the beginning of the next piece „Toffi“. Traditional African chants on a bass, piano and drum background flow into a passage where the piano takes off for a longer solo that is rooted in blues, boogie and ragtime jazz, the flute gets a solo passage as well on a base of latin tinged drum and bass patterns and a repetitive piano chords. But again the piece gets stripped down to it’s bare rhythmical spine and then Art Blakey comes to freak out on his drumkit. You can still hear the piano and bass doing the same line over and over again but your attention lies with the furious antics of Mr. Blakey while the percussive backing hypnotizes you. Again we have this cultish and ritualistic appeal. An orgy in rhythm. „Split skins“ as song title will prepare you for what comes over you. Another nine minutes of drumming power. It comes as a sheer endless drum solo and still keeps your attention going from the first to the last beat. Blakey is to the drums what Coltrane is to the tenor saxophone and what John McLaughlin is to guitar, a visionary, a traveler and searcher who pushes himself and his boundaries forward. Aged 38 by the time he recorded this album he reached his first peak. As a member of groups with Thelonius Monk and Miles Davis he certainly was a common name among jazz aficionadoes and this album showed that he actually was much more than just the drummer of some bigger leaders. A top classic and still as relevant as it was in 1957 when it got released.