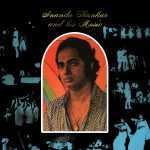 SPECIAL OFFER! If you read the name Shankar you may right away think of Ravi Shankar, the grand master of contemporary Indian folk music who was very popular in the 60s due to his connection with the music industry in the United States despite staying away from the pure pop music by maintaining his classic sitar and tabla style drone ragas to express himself musically. Ananda Shankar used to be his nephew who also made a journey to the USA to gather inspirations from rock artists like Jimi Hendrix among others. His first album from 1970, a conglomerate of classic Indian folk tunes and instrumental versions of the hottest rock songs of the day clothed in a veil of sitar melodies and backed up with tabla drum grooves, was an attempt to combine the spiritual approach of his cultural origins with the light minded blissful attitude of western psychedelic pop music. It worked well in the sense that it is still, nearly fifty years later on, a groovy little album that leaves nobody sitting around at any random hippie party. He took a five year break from recording to create what should become his second album and this is what I am about to present to you now. The cover-tunes were replaced by all original compositions with a lush instrumentation that features the typical sitar, tabla and bowed string instruments such as sarong and sera arrangements mixed with sounds that have a definite western origin such as rock guitars, Hammond organ and moog synthesizers plus full drum kits that take care to enhance the actual groove. Psychedelic rock, raga, fusion-jazz and funk flow into each other quite naturally giving birth to something fresh and exciting I would label as “Bengali pop”. The borders between eastern and western music get abrogated here. If it was not for a few deeply mythical chants on a bed of drones here and there you could not even tell this was a record by an Indian artist. This album is quite accessible most of the time and comes with a certain slickness that makes it easy for the listener to understand and appreciate what is going on. Still there is the other side of the coin, the spiritual depth pop music often lacks. So in the end this might have been too far out for the average western mainstream fanatic back in 1975 when disco began to rule but it is an awesome sound trip for fans of psychedelic dance music like INCREDIBLE BONGO BAND and all eastern influenced popular rock.